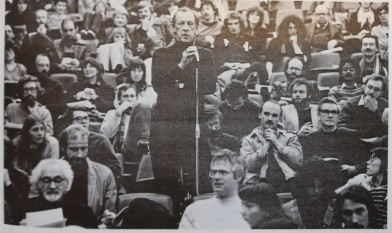 Raymond Williams (1921-1988) was an author, academic, cultural theorist, literary critic, public intellectual, socialist, and a leading figure of the New Left. He was the son of working-class parents from a Welsh border village, an adult education tutor, a Cambridge professor, and, according to Terry Eagleton, was and wasn’t a Marxist. From such unique positions, he established a new mode of critical analysis, cultural materialism, grounded in a concept of culture which identifies cultural practice as part of an active, dynamic, historical process. His work consistently draws attention to two strands within cultural forms: the contingent and the subjunctive. The former figures history as driven by human action while the latter looks for moments which ask what alternatives are possible and how. From here, Williams developed a number of enduring theoretical concepts: he identified a ‘structure of feeling’, what he described as ‘the area of interaction between the official consciousness of an epoch […] and the whole process of actually living its consequences’; he insisted upon viewing culture as ‘ordinary’, as everyday and (potentially at least) democratic, being constantly made and re-made; and he formulated three forces or tensions within the development of cultural form: the residual (pre-existing and traditional), the dominant (central and defining), and the emergent (new and challenging). All of these give a glimpse into his relevance and influence as well as providing a way of analysing and critiquing cultural transformation, placing a primary focus on culture as, what Williams notably called, ‘a whole way of life’, something made and lived.

In works such as Culture and Society (1958) and The Long Revolution (1961) he embarked on what would be a prolonged analysis of cultural development viewed through, and ingrained within, the transformations of industrial capitalism and capitalist society. He was influenced by Antonio Gramsci and the concept of hegemony, writing in opposition to the methods of vulgar or mechanical Marxism which fail to place due emphasis on the dynamic nature of cultural production. As Stuart Hall has noted, Williams played an integral role in the development of (a politically engaged) cultural studies. And he theorised the distinctive and decisive experiences of class, region, and community during an extended engagement with questions of form; these were all themes which he drew upon and expertly marshalled in his impressive debut novel, Border Country (1960). In Towards 2000 (1983), published five years before his death, Williams offered a prescient analysis of ‘nomad capitalism’ and labelled as ‘Plan X’ the political and economic project of social management now commonly understood as neoliberalism; for Williams, this was a new form of capitalism which aimed to ‘grasp’ and ‘control’ the future. He envisioned a powerful alternative: a radically new kind of politics coalescing around the disarmament, environment, and feminist movements. Cultural practice would, of course, play a defining role and Williams’s methodological approach offers a radical kind of critical analysis, one foregrounding the material processes and relations of culture itself.

LITERARY CRITICISM: The Country and The City (Chatto & Windus, 1973)

Preface to Film (with Michael Orram). Williams’s section of the book is titled: ‘Film and the Dramatic Tradition’. (Film Drama, 1954)

The English Novel from Dickens to Lawrence (Chatto & Windus, 1970)

Keywords: A Vocabulary of Culture and Society (Fontana, 1975)

Politics of Modernism: Against the New Conformists (Verso, 1989)

Daniel Hartley, The Politics of Style: Towards a Marxist Poetics (Haymarket, 2016)

Geoff Dyer, ‘Raymond Williams was one of the left’s great thinkers – he deserves to be rediscovered’, New Statesman, 12 March 2015.