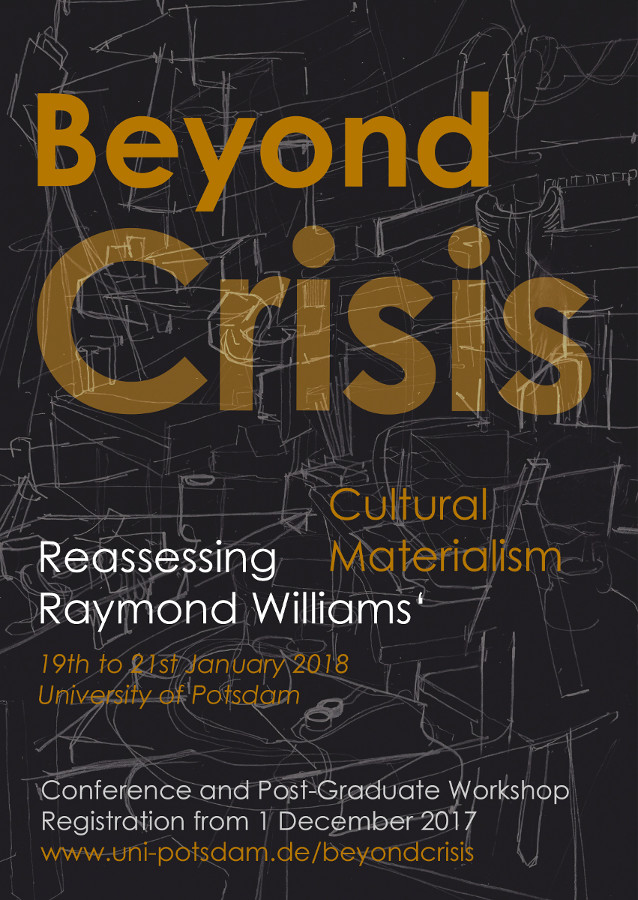 Welcome to the fifth instalment of the monthly Raymond Williams Society blog. This month we have a conference report from Germany. ‘Beyond Crisis – Reassessing Raymond Williams’ Cultural Materialism’ took place at the University of Potsdam earlier this year. It featured speakers from across Europe and demonstrated the broad reach of Williams’ thinking in both a contemporary and interdisciplinary context. One of the organisers, Berlin-based Harald Pittel, has kindly supplied us with this report on proceedings.

Many scholars from different generations and various disciplines responded to our call to reconsider Raymond Williams’ complex thinking through an engagement with notions of contemporary crisis. In his opening address in Potsdam, Dirk Wiemann emphasized that Williams’ concept of crisis shifts ambiguously, conceiving it both as “difficulty” and “turning-point”. A crisis causes pain and may be paralyzing, but on the other hand might also encourage political agency and enable an alternative path of development.

I and my fellow conference organiser Michael Krause made it clear that such agency is evident in the formation of protests and re-awakening of social movements in the face of present-day crises such as the Arab Spring (2010), Occupy Wall Street (since 2011), Black Lives Matter (since 2013), the Gezi Park protests in Turkey (2013) and the Women’s March on Washington (2017). All these movements can be understood as taking part in the “long revolution”, a gradual, painful and open-ended process of transforming culture towards more socially inclusive, economically just and democratic societies.

Setting Williams in a transatlantic dialogue with Jewish New York intellectuals such as Hannah Arendt, Irving Howe and Alfred Kazin, Daniel Williams stressed that Williams’ thinking contains a highly relevant critical impulse against the tendency of dominant cultures to “pass off their particulars as human universals”. The aforementioned critics tended to disagree with Williams in the early 1960s as they were clinging to an ideal of ‘high culture’ as opposed to accepting working-class cultural forms  as alternative sources of value (dismissing such a perspective as “mass culture”). However, as Williams theorized modern existence as suffering, resulting in a sense of difference as “the experience of breaking up and having to reconstruct oneself”, his thinking is closer to the New York intellectuals than they might have expected; the experience of linguistic and cultural borders, which all of these intellectuals share, is seriously reflected as such by Williams, while it remains implicit with writers like Howe and Kazin.

Focusing on Williams’ contemporary relevance at the level of theory, Daniel Hartley argued that Williams’ work has much to offer the new interconnected Marxist theorizations of capitalism which go beyond a narrowly understood idea of “mode of production” or question the exclusive status given to the working class as revolutionary actors. Potentially animating these theoretical revisions, Williams’ concept of “a whole way of life” stands as a critical alternative to reductive discourses or images that simplify social complexity. Such images include the figure of homo oeconomicus that is typically seen as the core of neoliberalism (which is really a much more “uneven world-systemic project”), but there are also reductive images from the left, aligning resistance to traditional revolutionary metaphors. Williams thus provides oppositional movements with a vantage point that takes into account the “actual multiplicity of subjects” beyond these images, making it possible to politically organize them on the way towards a “trans-species world-ecological transformation”.

Williams’ deep understanding of culture, which does not do without but accentuates a notion of political agency, was repeatedly highlighted by speakers. Considering recent debates around the democratization of the internet in the light of Science Fiction writing, Michael Krause emphasized Williams’ refutation of technological determinism, an idea that is behind many recent ideological simplifications of the internet as voiced, for instance, by the former CEO of Google-owning Alphabet Inc., Eric Schmidt. It is in opposition to such views that Williams not only anticipates some fundamental characteristics of the internet in writings like Communications and Television, but warns against the influence governments and corporations will take on the new media. However, Williams insists, it is for the civil society to take control of all those media innovations in order to fully realize their democratic potential.

On a more radical note, Mark Schmitt sees Williams’ novel The Volunteers (1978) as contributing to a theory of riots that in many ways comes close to and supplements the work of present-day theorists like Joshua Clover. The figure of the crowd is at the centre of processes directed at political participation in counter-hegemonic struggles.  Unlike a museum which preserves a static image of the past, Williams’ utopian fiction shows “how riots, as reactions to a crisis, can open windows onto the past, present and future of a community.”  As “uneasy symptoms” of an “unofficial democracy”, riots, while clearly set in their historical contexts, thus interrupt chronological temporality, unfolding a futurology of history in the making.

It is thus typically with a sense of uneasiness that the socially ‘new’ emerges in moments of crisis, and this insight is supported in the perspective of film studies. As Monika Seidl elucidated, it seems that this “uneasiness, disturbance, stress and displacement” that can be associated with “latency, potentiality and emergence”, is generally implicit in one of Williams’ most famous concepts: ‘structure of feeling’. Looking at film theory, Seidl emphasized the staggering similarity between Williams’ concept and the way in which the film studies scholar Mary Ann Doane describes the close-up. Structure of feeling shares with the close-up a “paradoxical nature”, it registers an intense experience of presence and yet has a structural side, a sign that demands to be read. The close-up thus epitomizes a crisis in which activity (feeling) stands at odds with conventions (structure), a crisis between cognitive uneasiness and the will to survive that phase.

Related to this, though focusing on the auditory rather than visual plane, my paper located a feeling of discomfort in the soundtrack of certain film musicals. In Jacques Demy’s Les Parapluies of Cherbourg, the real experience of financial despair, social isolation and war is disturbingly encapsulated in the film’s continuous ‘musical carpet’, the very un-interrupted-ness of the film’s easy listening soundtrack making for an uneasy listening experience. Registering the complexity of modern existence and the real experience of suffering, the film implicitly calls for a democratic opening-up of society beyond the authoritarian state, economic pressure, and the burden of tradition.

Structure of feeling is not only of interest to film analysis. Rather, it provides an important element for a deeper understanding of everyday phenomena, also enriching the perspective of Affect Studies. It is in this sense that Johannes Schlegel proposed combining Jane Bennett and Raymond Williams in his discussion of recent self-help books like Marie Kondo’s The Life-Changing Magic of Tidying-Up (2011). In this immensely successful best-seller, Kondo recommends freeing your home from all the objects that don’t “spark joy”. While bringing forward a seemingly naïve and immediate relation between self and object, Kondo’s underlying idea of the self, Schlegel made clear, is clearly in tune with what some critics have described as “neoliberal subjectivities” which are “formed through abjection and rely on self-managed lives through self-application and self-transformation”.

Working in the field of sociology, Stefan Wellgraf suggested that Williams’ concept of the structure of feeling can provide a crucial element for the analysis of social inequality. Looking at the everyday of a Berlin secondary modern school (Hauptschule), a key site in which social marginalization is problematically reproduced, Wellgraf emphasizes that this social situation is rarely registered as such by the school students, but is recorded indirectly in prevalent modes of affectual perception such as shame, anger, fear and envy. As Wellgraf argued, it is by focusing on the level of affects that larger processes of transformation – neoliberal and otherwise – can be traced.

Several speakers used Williams to offer complex analysis and critique of ideology and power structures in literary and media studies. Johannes Fehrle explained that adaptation studies can gain from combining the theoretical work of Williams and Pierre Bourdieu: Williams’ project of seeing culture as embedded within a capitalist society should be combined with Bourdieu’s theories on how the cultural field organizes cultural products in its own, field-specific way. Such a framework would be adequate to analyse recent phenomena such as franchise adaptations which are disseminated via new media networks. Cyprian Piskurek revisited Williams’ The Country and the City (1973), focusing on its critique of representations which glorify the countryside as a “pastoral ideal” with democratic connotations. However, such representations veil the true function of country houses in the history of class exploitation, for which they should be regarded as “visible triumphs over the ruin and labour of others”. Examining Downton Abbey in the light of Williams’ seminal book, Piskurek argued that the period drama is just one example of how the residual of a nostalgic countryside is deployed in terms of a stable core that can serve as a “fortress of national identity” – very much in tune with the sense of identity propagated by some proponents of Brexit.

Considering the rich critical potential of Williams for understanding the crises of today, the more general question of political commitment was addressed by H. Gustav Klaus who traced Williams’ biography as a political life “with ups and downs of greater or lesser intensity”, as evident from his support for miners’ strikes, oppositional movements and non-conformist intellectuals, with his pivotal role in drafting the 1967 New Left May Day Manifesto as a key event. However, Klaus noted that there is a deeper level of experience that characterized the political vita of this “public intellectual of working-class descent”, an experience marked by conflicting feelings of shame, loyalty and defiance which Williams has in common with Pierre Bourdieu and Didier Eribon.

Taking, like Klaus, biography as a point of departure, Barbara Maly-Bowie drew attention to how Williams’ own experiences of (im)mobility, (re)location and (dis)placement as a result of social mobility, extensive travelling, and “tight places” to be overcome in academia (as well as in politics) should be considered as the underlying drive for much of his “progressive” theoretical and literary work. More specifically, Maly-Bowie sees anticipated in Williams’ thought some of the central coordinates of what has become known as the “mobility paradigm” in the social sciences and humanities. While Williams’ notion of “mobile privatisation” signals a sceptical perspective regarding the ideological implications of how society reacts to technological innovations (with Netflix as a prime example), mobilisation could also be understood in a more positive way in terms of empowerment.

All in all, the range of disciplines in which contemporary scholars are engaging  with Williams’ work is impressive, ranging from philosophy to sociology, history to political science, as well as literary, film and media studies. Judging from the conference contributions, Cultural Studies, which has always played a minor role in German academia, seems to have a rich present-day existence as a transdisciplinary field in which contemporary crises can be analysed, critiqued and fought against from many sides. However, it is interesting to note that there appears to be little (if any) interest in Williams in a discipline most central him, theatre studies, which, however, would surely benefit from his cultural and political reflections on drama on the stage and in society.

Harald Pittel is a junior researcher in Literary and Cultural Studies at the
University of Potsdam. He has just finished his PhD thesis titled “Romance
and Irony: Oscar Wilde and the Political”.